Sorry! You missed The Carpenters Remembered at Parker Playhouse 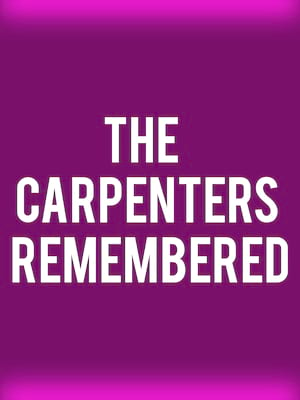 We've Only Just Begun: Carpenters Remembered is the definitive concert show celebrating the music of one of the most successful recording acts of all time.

Why See The Carpenters Remembered?

50 Years After Their First Album, The Carpenters Are Remembered

Pop brother and sister duo Karen and Richard Carpenter form The Carpenters had major pop hits throughout the 1970s, particularly with the unforgettable songs '(They Long to Be) Close to You' and 'We've Only Just Begun.' The duo also became one of the highest-selling music groups of all time by selling over 90 million records worldwide.

The Carpenters Remembered honors, commemorates and celebrates the band's memorable and much-loved music with singer Michelle Berting Brett, her Nashville band and under the direction of Harry Sharpe. This is the opportunity for die-hard fans to sing along and enjoy hit after hit from The Carpenters repertoire.

Seen The Carpenters Remembered? Loved it? Hated it?

Sound good to you? Share this page on social media and let your friends know about The Carpenters Remembered at Parker Playhouse.