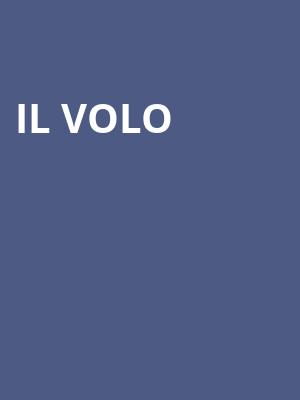 The group inhabits the intersection of the Italian pop standard and the soaring power ballad, the same sweet spot that has carried performers like Mr. Bocelli and Il Divo to superstardom.

In May 2009, three fresh-faced teenagers, Piero Barone, Ignazio Boschetto, and Gianluca Ginoble, appeared on the popular Italian talent show Ti Lascio Una Canzone and dazzled television viewers with their flawless rendition of the Neapolitan standard 'O Sole Mio'. Having successfully survived the rocky road from talent show sensations to respected artists, this trio of Italian pop-opera teenage singers return to the US in 2022 to celebrate over ten illustrious years together!

It wasn't long before Il Volo's managers; Michele Torpedine (who has looked after the careers of Andrea Bocelli and Italian rock star Zucchero) and world-renowned singer/producer Tony Renis who landed a worldwide recording contract for the trio with Universal Music Group which released Il Volo's self-titled debut album in Italy November 2010.

The album was a major success, paving the way for a record deal with Geffen in the US, the first time an Italian artist has signed with the label. There's been no resting on any laurels since then though - as 2022 sees the trio back in the US! Expect to hear some of the greatest hits from their repertoire, including 'My Way', 'Grande Amore' and of course, that performance of 'O Sole Mio!'

Exceptionally talented performance. I was captivated by the tender and... more

The orchestra and the tenors' voices were magical! Loved the eclectic mix... more

Sound good to you? Share this page on social media and let your friends know about Il Volo at FLA Live Arena.