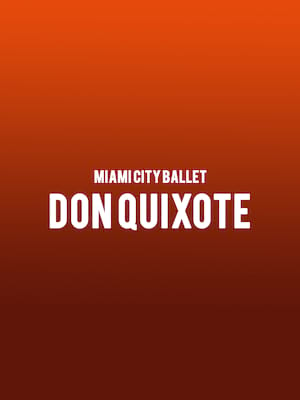 Who couldn't use a little romance, especially when accompanied by explosive jumps, fiery turns, fabulous costumes and a big dose of happiness.

Fusing high spirited comedy and breathtaking dance, iconic balletmaster Marius Petipa's legendary Don Quixote ballet was first performed by the Bolshoi Theatre of Moscow in 1869, going on to become a long-lasting favorite of the classical ballet repertoire throughout the world. The Miami City Ballet presents the delightfully kaleidoscopic adventure as part of their 2020/21 season programming, featuring a live orchestra performing Minkus' rollicking score.

Based on Miguel de Cervantes classic novel 'Don Quixote de la Mancha', the ballet uses the spice of Spanish folk dances, jaw-dropping and technically demanding movements, spirited music and a sense of theatricality to illustrate episodes from the tale about an old man who becomes a knight errant. After he reads one too many fairy tales about damsels in distress and medieval romance, Quixote sets out on an adventure with his faithful and slightly saner sidekick Sancho Panza, drawing much ridicule and infamy as attempts to woo and bring honor to the lady of his dreams Dulcinea.

Sound good to you? Share this page on social media and let your friends know about Miami City Ballet - Don Quixote at Au-Rene Theater.