Sorry! You missed A Tribute To The Beatles White Album at Au-Rene Theater 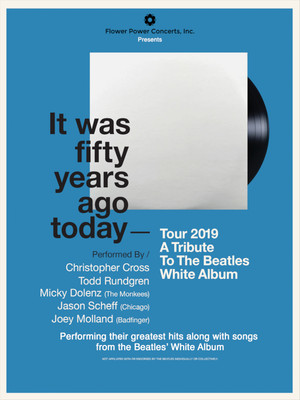 A Tribute To The Beatles White Album

if you've ever wanted to see Dolenz go from "Pleasant Valley Sunday" to "While My Guitar Gently Weeps," here's you chance.

Why See A Tribute To The Beatles White Album?

Five legends come together for a tribute to the Beatles

In celebration of 51 years since the release of The Beatles' seminal White Album, Micky Dolenz (The Monkees), Todd Rundgren, Christopher Cross, Jason Scheff (Chicago) and Joey Molland (Badfinger) are teaming up for It Was Fifty Years Ago Today, a live tribute to the timeless record. Featuring a mixture of their own greatest and songs from the 1968 Beatles classic.

Micky Dolenz needs little introduction as the singer and drummer of platinum-selling pop legends The Monkees, the TV show group who went on to global success with over 65 million records sold. Grammy-winner Christopher Cross is best known for his 80s singles 'Sailing' and 'Arthur's Theme (Best That You Can Do)', both peaking at number 1 on the Billboard 100, whilst Todd Rundgren's album A Wizard, A True Star is still held as one of the most influential albums of its generation, featuring in the book 1001 Albums You Must Hear Before You Die. Jason Scheff is the longtime lead vocalist of multi-platinum selling band Chicago and Joey Molland is best known as one of the forces behind Badfinger, the first band signed to The Beatles' Apple label.

Sound good to you? Share this page on social media and let your friends know about A Tribute To The Beatles White Album at Au-Rene Theater.